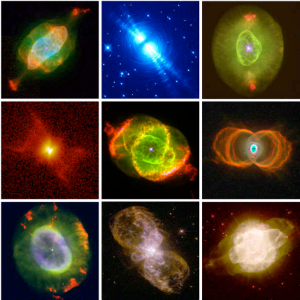 Although the main science drivers in the design of MEGARA refer to the study of the external galaxies, several are the potential uses of this instrument in Galactic astronomy. In this regard, members of our Science Team plan to use MEGARA for the spatio-kinematical modelling of planetary nebulae. The characteristics of the MEGARA IFU (even if only the central compact bundle is available initially) are ideally suited for the study of pre-planetary nebulae, given their relatively small projected size in the sky.

The shaping of planetary nebulae (PNs) is probably the most exciting yet least understood problem in the late evolution of ~1-8Msun stars. PNs evolve from the envelopes of Asymptotic Giant Branch (AGB) stars through the very short (~1000 yr) pre-planetary nebula (pPN) phase. During this phase, the nebular morphology and kinematics are dramatically altered: the spherical, slowly expanding (Vexp~ 15 km/s) AGB circumstellar envelope (CSE) becomes a PN with clear departures from sphericity and fast (>100 km/s) outflows directed along one or more axes. The varied PN and pPN morphologies include not only axisymmetric (elliptical and bipolar) shells but also multipolar (multiaxial) structures, multiple co-axial shells, highly collimated jet-like ejections sometimes arranged in a point-symmetric structure, etc. (see figure above).

There is still no consensus for what causes the change from a spherical wind to bipolar mass-loss in dying stars. The most widely-accepted mechanism is the presence of a fast collimated post-AGB outflow or jet that carves out an imprint within the AGB CSE producing and shaping the fast, bipolar lobes observed in most pPNs and PNs. Detailed spatio-kinematical modeling of pPNs is crucial to obtain information about the properties and dynamics of post-AGB winds and their evolution.

We plan to use MEGARA to observe a sample of ~15-20 pPNs and PNs using the highest spectral-resolution mode (R=17000-20000) in the Hα region which will enable studying the spatio-kinematical structure of the nebulae with unprecedented detail for the diverse structural components (shocked lobes, emission knots, arcs) present in the sample (see figure).