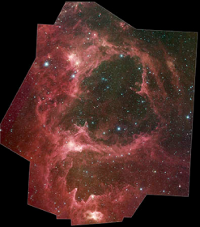 As a last example of the potential uses of MEGARA in the field of Galactic astronomy we plan to carry out a spectroscopic survey of stellar clusters in the outer disk of the Milky Way.

One of the most important astrophysical phenomena which is needing a comprehensive explanation is star formation, specially in the low-mass range, down to substellar masses, and the effect of the local environment, including metallicity, in this process. Although this is a problem that we currenly only face in Galactic studies, it has implications at all scales.

Most our knowledge about stellar properties come, in fact, from observational data taken in the solar neighborhood and, in particular, from members of stellar associations of different ages located at distances closer than 0.5 kpc, such as Orion and Taurus - about 1 Myr, Upper Sco and Sigma Ori - about 5 Myr, or the Pleiades and the Hyades -125 and 600 Myr, respectively. Stellar associations offer the advantages of including a homogeneous population of coeval stars with the same metallicity. Intercomparison of members of an association provides the dependence of different properties with mass, whereas intercomparison between different clusters provides the dependence with age and other, more subtle, parameters (metallicity, environment). However, due to the lack of collecting power, most of the associations beyond this small radius, insignificant from the perspective of the scale of the galaxy, have not been explored, except for the most massive members (O and B spectra types).

MEGARA will allow us to investigate the properties of the cluster members farther away, which might be different to the solar vicinity. In particular, GTC is perfectly suited to investigate the Perseus Arm, located at about 2.5 kpc in the antigalactic center, and its very large number of star forming regions and open clusters with small to moderate angular sizes (see e.g. the complex W3/W5/W5 in the figure below). With MEGARA we should be able to collect a large number of simultaneous medium- and high-resolution spectra at high and moderate S/N, and track the properties of the members associations: from accretion rates and activity (Hα, CaT) to rotation and age-dependant properties (lithium and other alkali lines), and, of course, to conduct the first accurate spectroscopic cartography (by working at R=18000) of the metalicity in this arm.