The interests of the MEGARA Science Team extend beyond the Local Universe. One of these interests are the study of the stellar populations and ionized-gas chemical abundances and kinematics of intermediate-redshift star-forming dwarf galaxies.

According to the state-of-the-art ΛCDM hierarchical models of galaxy formation, low mass dark matter halos assembled the earliest in the Universe. Most of these first halos merged to form more massive galaxies, but a fraction of them survived until the current epoch as proved by the existence of dwarf galaxies. While the history of low-mass dark matter halos is relatively well understood theoretically, the formation history of dwarf galaxies is still poorly reproduced by the models due to the distinct evolution of baryonic and dark matter in these halos. Indeed, low-mass dark matter halos are thought to be inefficient in either accreting or retaining gas and in cooling the remaining gas in order to form stars (Efstathiou 1992, Babul & Rees 1992; Haimann et al. 1997, Shaviv & Dekel 2003; Wyithe & Loeb 2006).

MEGARA working on GTC will allow the kinematical analysis of numerous samples of star-forming dwarfs at intermediate redshift. Focusing into the faintest star-forming galaxy population at different redshifts, we will target those objects with smaller masses and sizes (the most sensitive to the effects of negative feedback) but still able to form stars at a high specific rate. This analysis will be crucial for our better understanding of the main processes involved in galaxies assembly and evolution. Pilot observations of these objects with Magellan and Keck (Rodríguez et al. 2012, both in prep.) indicate that star-forming dwarfs between 0 < z < 1 are rather numerous in deep blind cosmological surveys and show very high emission-line equivalent widths for which, in spite their faint apparent magnitudes (I~25 AB mag), the observations with MEGARA are particularly well suited.

In the figure below we show a compilation of the HST images of some of these targets for which spectroscopic redshifts from low-resolution optical spectroscopy have been determined from the ground. 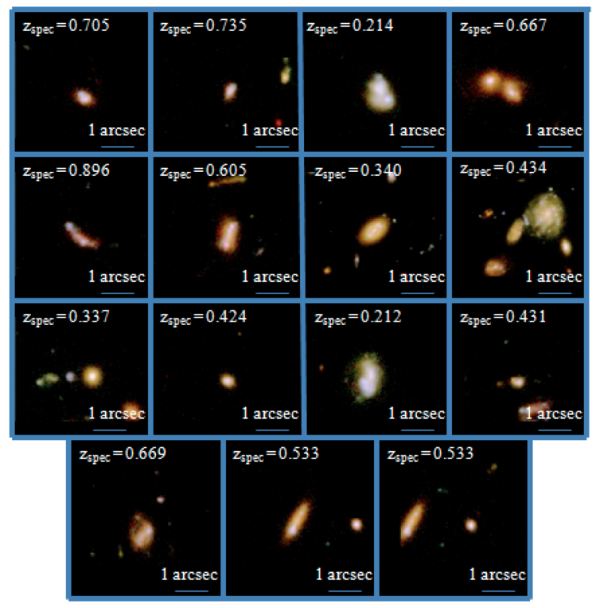