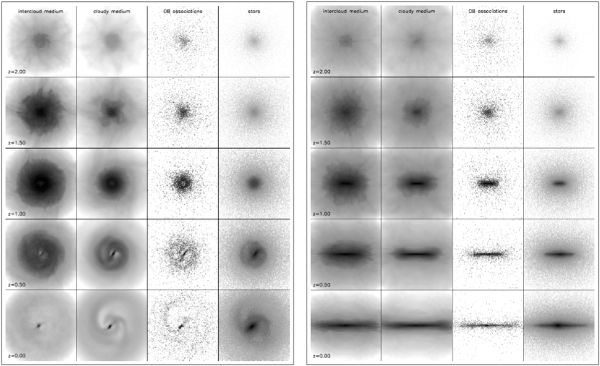 The main interest of the MEGARA Science Team refer to the study of nearby galaxies, with focus on the study of the history of star formation and chemical and kinematical properties of disk systems. We refer to this project as MEGADES, MEGARA Galaxy Disks Evolution Survey.

We know that the evolution of galaxy disks is a complex process as many are the mechanisms that might alter their present-day photometric, chemical, and kinematical properties: minor mergers, bars, rings, density waves, stellar diffusion, gas in-fall, and, in the case of galaxies in clusters, also ram pressure striping and galaxy harassment.

Despite this rather discouraging scenario, a picture for the formation of disks has emerged during the last two decades that attempts to explain most of their observational properties: During the first several Gyr of history (z>1) the evolution of disk galaxies is dominated by frequent (mostly minor) mergers which lead to the formation of what it is known as the thick-disk component. After that period the frequency of mergers decreases and the disk becomes dynamically cooler allowing for the formation of the so-called thin-disk component. During the evolution of the thin disk (at z<1) the high angular momentum of the gas in the outer parts of the disks results in a delayed gas in-fall and SF activity in these regions compared to the inner disk. This is known as the inside-out formation scenario of disks.

However, in the last few years many results are showing that this otherwise elegant scenario, is unable to explain some the properties of the disks, specially in the outer parts. The results include the observational evidence of flattening (and even reversal) of both color and metallicity gradients in the outer parts of galaxy disks (Bakos et al. 2008; Vlajic et al. 2009). From the theoretical perspective simulations of the evolution of disks are showing that the effects of stellar migration and satellite accretion can significantly alter the properties of the outer disks compared with those predicted by the inside-out formation scenario (Roskar et al. 2008; Sánchez-Blázquez et al. 2009; see figure below). 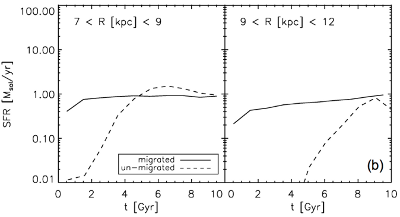 The observations to be carried out within MEGADES aim at the understanding of the relative roles of these mechanisms (in-situ star formation, stellar migration, satellite accretion) in shaping the current-day properties of disks, namely stellar populations, chemical abundance patterns, kinematics.

In this regard, some of the proposed observations includes the observation of individual stars from the disk of M33 at different radial distances in order to study their metallicity distribution and galaxy velocity ellipsoid (in the CaT and blue region, respectively for RGBs and young massive stars; see figure below). 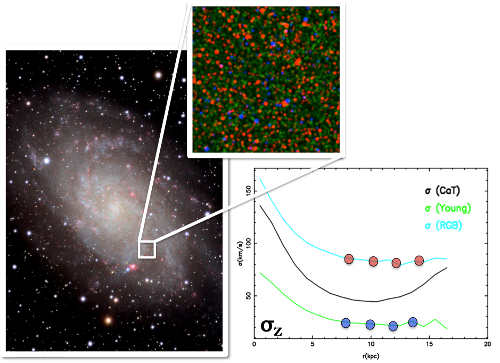 The observation of a subsample of galaxies from the volume-limited S4G survey is also planned as part of this project in order to span a wide range of galaxy properties (morphology, luminosity, environment).

In addition to the study of nearby disk galaxies the MEGARA Science Team will study to an unprecedented level of detail the properties of both starburst galaxies (mainly their gas kinematics) and elliptical galaxies (stellar populations and stellar kinematics).

In the case of the analysis of starburst galaxies our objective is to measure the balance between negative and positive feedback in massive starbursts at different redshifts. The sample to be observed includes massive and compact superstellar clusters in two nearby galaxies (M82 & NGC3079; see figure) and massive intermediate to intermediate-z star forming clumps selected from cosmological surveys. Using MEGARA we will be able to detect, resolve and characterize spectroscopically the targets, analyze their physical state, star-formation history and look for the presence of different velocity components that will enable us to determine their hydrodynamic state. The combination of the high spectral resolution of MEGARA together with the GTC collecting area will make it possible to acquire the observations required to conclusively derive the feedback parameter.

MEGADES was designed with the aim of providing an additional (legacy) value that will allow answering fundamental open questions in astronomy, including: