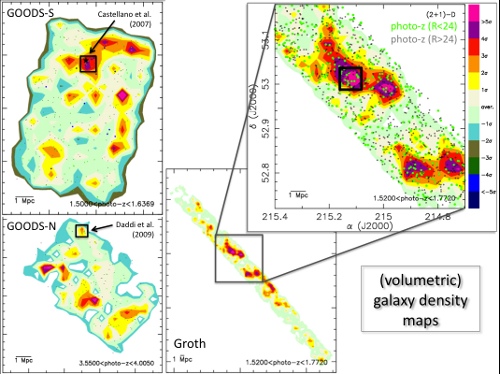 Another topic of interest in our team is the study of the very high-redshift Universe. Given the characteristics of MEGARA, ideally suited for the study of relatively dense fields, our team plan to carry out a deep spectroscopic survey of high-redshift proto-galaxy clusters.

According to LCDM cosmological model the cooling of the gas and the star formation are closely linked to the hierarchical evolution of dark matter halos that coalesce to form bigger structures as we move along the Hubble time. Consequently, the detailed study of the large-scale structure in the Universe at different epochs is key for understanding the evolution of galaxies, also imposing strong constraints on cosmological parameters (e.g., Eke et al. 1998). With this in mind we aim to obtain multi-object spectroscopy of several galaxy over-densities at redshifts between z=1 and z=6 in deep cosmological fields such as GOODS-N, the Extended Groth Strip (EGS), COSMOS, or the Spitzer Ultra Deep Survey (SpUDS) field. Each region has 50-150 cluster member candidates with I < 25-26 AB mag within a circular aperture of 4'. Given that we are interested in studying large-scale structures, our program aims at obtaining very deep spectroscopic data in small fields of very specific regions in the sky, only pre-selectable in very large ultra-deep surveys such as the SXDS, EGS, COSMOS (see figure).

The spectroscopic data obtained in this proposal will be used: